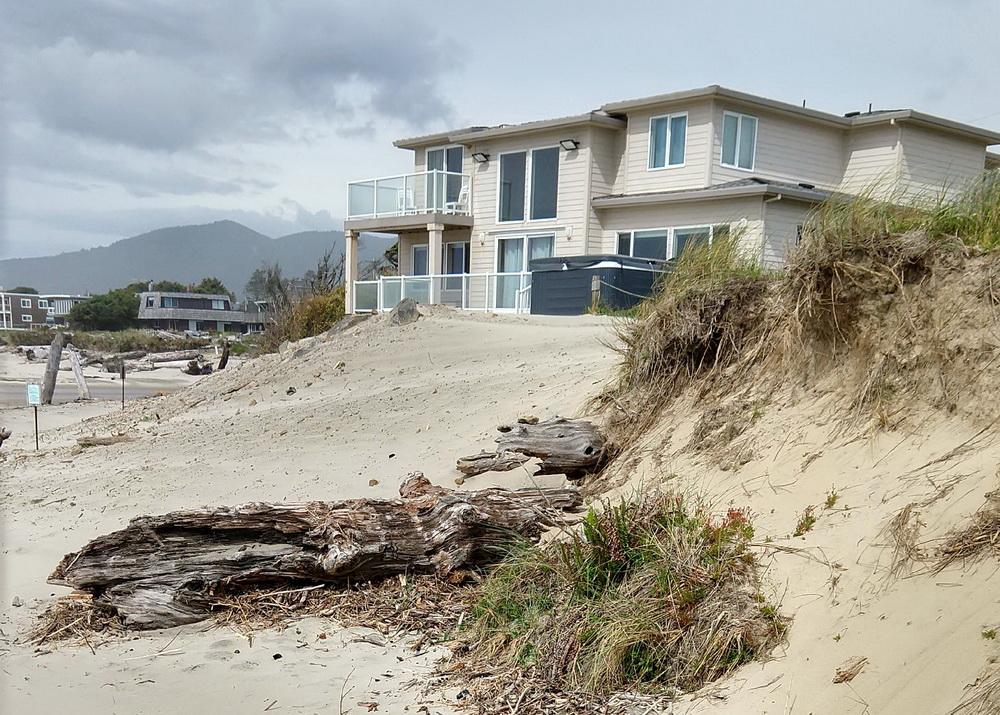 The Tai Dang house in Rockaway Beach, showing the eroded dune where he is placing the riprap.\Photo by Phillip Johnson.

Oregon Shores has lost its final, last-ditch stand in a years-long struggle to prevent the riprapping of a structure in Rockaway Beach that never should have been built.  The owner was allowed last year to install temporary riprap; his application to make the riprap permanent was the final opportunity to block shoreline armoring for the property and protect the integrity of Statewide Planning Goal 18.

We regret to report that the state's Office of Administrative Hearings found against our appeal of what we consider to be an erroneous decision by thke Oregon Parks and Recreation Department (OPRD) to grant the permit for permanent riprap of the site.  This decision, announced last June 28, violates Statewide Land Use Goal #18 (Beaches and Dunes), in our view, and without doubt creates an extremely dangerous precedent.  Oregon Shores then appealed to the State Parks director in what is known as a "contested case hearing"--the final act in this disturbing drama.

OPRD's decision to issue a shoreline protection structure permit for the property was based on a determination that the property was eligible for such shoreline armoring under Goal 18 of Oregon's land use planning laws.  Implementation Requirement 5 of this goal limits riprap permits to properties that were developed prior to 1977.  In our appeal, we argued that OPRD improperly determined that the property was eligible, and that the decision ran counter to established legal precedent.  While this situation raises many important issues, the formal appeal process was restricted to this one technical land use question.  The hearings judge deferred to the agency's judgment, however wrong we believe it to be.  We have exhausted every avenue for opposing the decision, so the riprap structure marring the beach will remain.

The comments most recently submitted by Oregon Shores during the public hearing that was held to to consider this ongoing issue may be viewed here.

At one point it appeared that owner Tai Dang’s attempts to armor the shoreline to protect his house at 211 S. 6th St. had been successfully thwarted.  The City of Rockaway Beach refused to certify that his property qualified for armoring in accordance with the city’s comprehensive plan, and State Parks followed by denying his application to intrude on the public shoreline with a riprap structure.  However, Dang successfully sued the city, which was forced to accept that because the city had mistakenly granted him a permit, it was therefore forced to acknowledge that the property qualified for riprap, whereupon, in January, State Parks granted him permission to install a temporary 81-foot-long wall of riprap.  In the wake of the recent decision, that “emergency” permit has become permanent.

The issue was whether the city’s error in originally granting Dang a permit outweighs the public’s right to preserve its shoreline, which is damaged by the shoreline armoring for a building that should not have been allowed in the first place. There is no question that the structure is severely threatened; the question was whether a developer can in effect play chicken with the authorities, building in a foolish location in violation of all setback provisions and then daring them to allow the vulnerable structure to collapse.  The recent decision creates the precedent that anytime a city or county violates its own plan and allows a structure to intrude on the shoreline, the state through its permitting agency, OPRD, will not be able to protect the statewide common interest in the public shoreline.  This is one of many reasons that Oregon Shores believes that this issue was wrongly decided.

The case has a long, convoluted history stretching back several years.  Developer Dang (and two partners) built the structure very close to the edge.  It is used as a short-term vacation rental—a “party house,” according to unhappy neighbors—and so Dang and his partners wanted the maximum proximity to the beach.  The location clearly violated the city’s beach setback ordinance.  However, a part-time planner with the city, using absurd logic that made a mockery of the city’s clear intentions under its comprehensive plan, granted a permit.

When Dang subsequently applied for a permit to riprap the structure, because the low dune it is built on was rapidly eroding (which is why it should never have been built), the city refused to authorize shoreline armoring because a new, more diligent planner, realized that the house’s location violated the land use plan.  State Parks, which grants permits for shoreline protection structures (such as riprap) which extend onto the public shoreline, turned him down on the basis of the city’s decision.

Oregon Shores opposed the application before both the city and State Parks.  When both denied the permit, Oregon Shores supported the city and state through Mr. Dang’s appeals to the courts, which were initially unsuccessful.  However, Dang and his attorneys took a different legal tack, and this time succeeded on the grounds that his house had been permitted, even if erroneously.

Some background:  The request for a riprap permit is for a two-story, 3,300-square-foot home at 211 S. 6th St., just south of Saltair Creek. The home serves as a vacation rental.  Dang, the principal owner, sought permission to construct a 14-feet-tall-by-81-feet-long riprap wall along a dune in front of his lot, claiming that the shoreline at the border of his lot has been eroding at a rate of three feet per year for the past two decades.  (Note that this means, by his own testimony, that he was well aware of the erosion risks when he built the house in 2008.)

State Parks (the Oregon Parks and Recreation Department), which manages Oregon’s public shoreline, is charged with issuing permits based on its own regulations and on consistency with statewide planning goals. Goal 18 of Oregon’s land use planning laws requires that to qualify for shoreline protection, a property must have been developed before 1977 (although there is provision for emergency permits when more recent structures are threatened). State Parks defines “developed” as meaning that utilities were extended to the street where a parcel is located by that year; opponents of riprap proposals are often surprised to find that lots that were vacant until recently nevertheless qualify for riprap under this interpretation.

The house in question was built long after 1977, but might have qualified as being on a developed lot. However, when Oregon Shores requested a hearing on the original application, the City of Rockaway Beach retracted its initial determination that the project was consistent with its comprehensive plan and zoning ordinance.  While the threat to the house from erosion is real, if the house was constructed in a location that violated the city’s plan, it would not qualify for protection. When built, the house was to be located behind the city’s Ocean Setback Line, which would have qualified it as conforming with Rockaway’s Goal 18 “exception area.” It now appears, according to the city’s administrative decision, that the house was built much closer to the edge than the smaller structure it was to replace. Erosion would not currently be a threat if it had been built on the location the city thought it was approving.  This is the matter that the applicant successfully appealed, and gained a court decision on narrow property rights grounds rather than the public interest.

No one questions that erosion threatens the house, but Oregon Shores members and other opponents argue that the public shouldn’t lose part of its beach to protect a structure that should not have been built in that location. Moreover, neighbors are concerned that an armored shoreline in front of this lot will deflect waves and cause erosion on neighboring properties (including a public beach access) and possibly further up Saltair Creek. Testimony against the application at the original OPRD hearing by knowledgeable local residents was solidly factual and credible, and might have been sufficient to persuade OPRD to deny the proposal even without the city’s decision that the property didn’t qualify.  The application can be viewed here.

Dang and the other owners have prevailed, and OPRD has allowed a local planning error to trump the statewide public interest in Oregon's beaches.

Oregon Shores will continue to work in other venues to preserve the integrity of Goal 18 and Oregon's legacy of public beaches.

Help preserve the legacy of our Oregon coast for all generations

Become a member and help us celebrate and conserve the Oregon coast, its resources, and its public shoreline.